a disappointing Halloween weekend with just 1 sighting, despite warm weather both nights and the biggest crowds I've had since I started my lady-counting. October finishes with a pitiful 5 sightings of peeing women and the lone Friday night Halloween sighting is my 1st for November and 88th for the year: exact same total as this date last year. I'm disappointed I couldn't get to 90 sightings of peeing women in October and now probably will finish this ultra-boring piss sightings year somewhere around the 95 I finished last year with - except with just 1 picture, can't do much worse in pictures than that. So to liven up what would be an otherwise boring short report, I've made this a web page report by including pictures I snapped of the lady after she peed and her piss puddle like I did in my Halloween report last year. I had no chance at a picture of the lady while she peed and decided to snap her after she left the scene, hoping for more excitement during the 2 nights where I wouldn't need to use it - but it turned out to be the only piss sightings excitement during the weekend and a 3rd picture is included, a cropped partial-shot from one of my albums as part of a short story on a female peeing technique that produces male-looking piss puddles.

Halloween has really become a big deal! Friday night saw the biggest crowd of the year in the sightings of peeing women area, Halloween parties and lots of cute and sexy costumes among the ladies as people really enjoy dressing up and being someone else for awhile. There were a handful of Sarah Palin look-alikes, they had her sexy business suits down but none looked enough like her to even be a bad impersonator. I snapped pictures of some of the more interesting ladies in their costumes, which was fun and made the night interesting despite the limited sightings of peeing women activity. I didn't even see any ladies who were desperate, odd because in past years ladies in costume have been pretty uninhibited about expressing their desperation when they had to pee. It's clear this year's ladies are different, more of them just don't feel ladies should do things like pee outside.

Friday night's late crowd was the biggest since I started doing my lady-counts this summer, 200 more ladies than my previous biggest night in September (Oktoberfest's 2nd weekend). Saturday night's crowd was considerably smaller and dead by comparison but was bigger than most Saturday night crowds have been, as it ranked as my 10th biggest lady-crowd (of 32 nights of counting). The weekend total was 306 ladies more than my biggest weekend total (the first weekend of October a couple of weeks ago), it's been a surprise that these September/October crowds have been bigger than the July/August crowds - the probable reason my sightings of peeing women have been declining during those summer months in recent years. Halloween weekend crowds were huge last year too, they may have also been bigger than the July/August crowds but I wasn't counting ladies last year so I didn't know for certain. This week's lone sighting came among the huge Friday night crowd, it's story and 2 pictures from it:

Saturday, 2:20 a.m.- It had been a frustrating night piss sightings-wise and I thought I was going to go home without a sighting. At the RTD block a 20's couple entering the block coming from the busy area north went up onto the park area and walked across the grass towards the pee sidewalk. The security guard was not outside then, mainly because of bigger crowds in the terminal building boarding the last late bus. Near the terminal building I could see the couple as they stopped by the pee sidewalk, they kissed and hugged for a couple of minutes before the lady started looking around which made it apparent she wanted to pee. But she didn't want to use the pee sidewalk they were standing on, walked out of there and turned down the back sidewalk while the guy waited at the pee sidewalk. A pretty blonde wearing a clingy knit purple short dress, she walked past the lighted storage door on the building wall next to the pee sidewalk and turned and went into the dark corner behind that building. I wanted badly to go over there, but as I stepped towards the back sidewalk the boyfriend stepped out like he wasn't going to let me go there - the confirmation she was over there peeing. So I had to wait by the terminal building, she came out about 30 seconds later pulling the sides of her dress back down and went over to her waiting boyfriend. 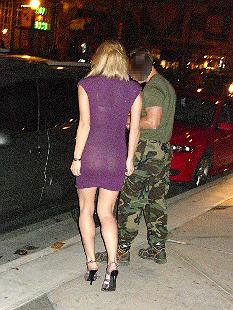 As they walked off I decided to get a picture of her before going over to look for her piss puddle, getting this picture of her and her boyfriend as they got to their car parked just outside the park area of the RTD block on the street. She kept tugging at the back of her see-through dress trying to align her panties underneath as she walked, as they stopped by the car and the boyfriend was unlocking the door - dressed in a military combat costume with his face painted (pixelated here) - she was tugging at her panties through her tight dress again as I snapped this picture. Another of the desperate pretty ladies I catch peeing outside in my piss sightings area, see why I keep coming back? 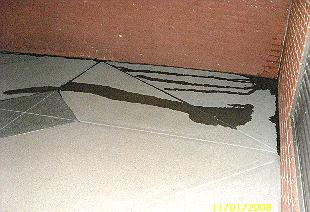 After they got in their car and left I went back to the building and found her puddle, snapping this picture. Hers is the 2nd puddle in the middle of the sidewalk, the puddle in the corner by the wall was made by a guy earlier. This picture shows the biggest difference between male and female piss puddles: men will pee on walls and soak the ground right at the base of walls, while females will squat with their backs to walls and shoot their pee streams down and forward away from walls - most females that is, as I occasionally see ladies who stand and bend over with their butt facing or on a wall and their pee streams flow down and run back against the base of the wall by their feet making piss puddles that look like a man peed.... 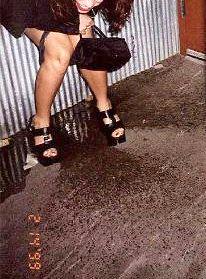 This female peeing technique is demonstrated here, in a cropped partial-shot from my collection of the sexiest of the ladies I've caught peeing this way (desp 121 in album 6): her standing lower bent-over body in her black miniskirt with her butt leaning against the wall behind her, black panties bunched up around her thighs. She's peeing straight down to the base of the wall behind her feet, making a huge male-looking piss puddle against the base of the wall around her feet. I didn't think a lady could do this until I saw her doing it! Snapped this picture at bar closing time late night on Valentine's day in '99, in the back doorway of a corner bar building in an alley she ran to I call 'Valentine's alley' in honor of her. She was laughing while I snapped this, completely unable to stop the flood she was peeing. I sometimes forget how many awesome emergency outdoor pisses I've had close up views of seeing ladies take, it's still amazing to see what ladies will do when they are so desperate to pee it overpowers their inhibitions! And we learn something from this, the many different ways ladies can pee outside compared to men.
Where the hell is a toilet when a really desperate lady needs it most??

Pee percentages: The lone Friday night lady who peed was the only one among the 817 late-hour ladies I counted, a percentage so small I won't even mention it here and the total weekend ratio is even smaller, her still being the only lady who peed among (this time) the 1309 total ladies I saw in the piss sightings area both Friday and Saturday nights. All of these dry weekends have lowered the overall total pee percentage below the half of 1 percent it's been, it's now .47 tenths of 1 percent of all the late-night ladies I see in the sightings of peeing women area.

Cooler next weekend with small crowds the rest of the year. Will the weather allow me to get 12 more sightings of peeing women the next 2 months to reach 100? It didn't last year, and snow could come at any time now.