She was dangerously close to wetting her panties.

Dear Readers,
2 sightings in a weekend where the weather is getting cooler and Octoberish, I was lucky to get those but I'd call them 'destiny sightings' as I walked up on both of them. 7 sightings for October and 84 for the year, hard to believe but I've just gotten more sightings in October than I got in the entire month of August (6). With August finishing a whopping 15 sightings below its average, a record drop for any month, it's the biggest reason I won't get to 100 this year. I'd have 99 sightings now if August had been an average month, July finishing 11 sightings below it's averages makes up the rest of the summer deficit that will rob me of 100+ sightings for the 1st time ever this year as I'd have 110 right now if July had been an average month too. What the hell happened during those months? I'll have my thoughts on that in my yearly sightings summary next January.

I snapped a puddle shot of the weekend's first sighting, making this another web page report. I'm getting far too comfortable settling for these puddle shots, 32 of them this year compared to just 5 pee shots, while I snapped 17 puddle shots and 14 pee shots last year. 118 sightings on this date last year.

I went down late both nights this weekend. Friday night was clear and cool with night temps in the low 50's, small crowds made the area really dead and appreciating the people Oktoberfest draws to the area. I left the area and got the night's only sighting outside the sightings area before getting to my car, a 'destiny sighting' as it seems I'm just destined to stumble up on peeing ladies. It rained much of Saturday evening with temps dropping to the mid-40's, I wasn't going to go out but it stopped raining a little before midnight so I went out late for a short while. Crowds were much better Saturday night with a little drama before I got the only sighting.

I was walking by the RTD block when I heard loud voices from the other end of the block, which were 4 loud young black ladies. They were coming my way but lingering and taking their time walking the block, I decided to leave because I was already annoyed listening to them. As I was approaching them I could hear the chatter was 3 of them complaining about how badly they had to pee, one of them eyeballing me as I was about to pass them. "Do you know where we can use the bathroom?" the lady said as I got to them. They were right by the open terminal building but it hadn't occurred to them to go in there, which made me realize most of the ladies coming by here don't think of going in there either. "Anywhere around here, any of the buildings!" I said. I think she wanted me to stop and talk but I wasn't the least bit interested. "I'm about to pee in my pants!" one of the other ladies said, the tiniest lady in the group who was petite and thin. The group crossed the street to the crowded bars there and pushed their way into one of them to use the bathroom. This bathroom situation for ladies in the sightings area at night really is an issue, probably half of them I see walking the streets have to pee but only a few of them do while most make themselves hold it. On to the 1 story each night, the puddle shot coming on the 1st sighting:

Saturday, 2:32 a.m.- On my way back to my car after leaving the sightings area I heard ladies' voices as I was approaching a corner 2 blocks from where my car was. 2 ladies were standing in a building doorway right by the sidewalk, a side door to a corner restaurant. A 3rd lady was sitting on a bus stop bench near the doorway, I don't know where they came from but they were apparently waiting for a cab there. One of the ladies in the doorway started unsnapping the front of her jeans before pushing them down and squatting while lady 2 stood in front of her, lady 3 had gotten up from the bench and pulled out a digital camera and snapped a shot of her peeing behind the other lady. She took about a 15 second piss before standing up and pulling up her jeans as I watched from across the street, within 5 minutes a cab pulled up and the 3 ladies got in and it drove off. It continues to amaze me to see ladies yank down their panties and squat and pee so casually in such openly public spots as this and just walk off after finishing without a second thought! I went over and snapped this shot of her puddle, an average sized piss for a lady. I like these puddles so much because they are the evidence that a lady actually peed, I've seen some squatted ladies over the years who I thought peed but after they left the ground below where they squatted was dry so I couldn't count them as sightings. 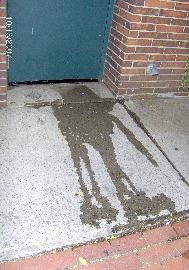 The camera did good on this shot, and I'm happy to say it's been taking more sharp pictures the last week. Remembering that these digital cameras are computers, I 'rebooted' it by taking the batteries out one day last week and leaving them out overnight which resynchronized all it's settings and it's been working better since then. In 2 years I've snapped as many shots with this camera as I did in probably 5 years with my 35mm camera, since I can see the results right away and delete pictures I don't like. The biggest difference in 35mm vs. digital camera performance is the auto-focus systems, they're slower and much less consistent than 35mm camera focusing systems and produce too many blurry shots when they shouldn't. Blurry shots are the top complaint people have about digital cameras, hopefully the new generation of digital cameras have better and faster auto-focus systems. Other than that, they are great with all the things they can do.

Sunday, 1:47 a.m.- Across the street from the north end of the RTD block 2 ladies and a guy coming from the busy area were waiting to cross the street to the RTD block. One of the ladies seemed pretty animated with the other lady and guy trying to talk her out of something. Suddenly she turned and started walking back down the block by herself with her friends calling her, was she angry about something? I somehow knew her problem was that she had to pee and she was dangerously close to wetting her pants, I crossed the street and passed her friends as the desperate lady turned up into that parking lot next to the corner building. By now the guy and other lady were walking over there, I looked into the parking lot to see the lady walking over towards a car parked in a space midway down the lot towards the alley unbuckling the belt of her olive denim pants. The other guy and lady stopped just inside the parking lot to wait for her, she went up on the far side of the car pushing down her pants and bending down starting to squat. Turning her back to the building wall she squatted down where I could see her butt sticking out in the gap between the front of the car and building wall, she looked over and saw me and moved up to the car's front tire and squatted down where I couldn't see her. Would have gone for the shot if her friends hadn't been there, I'd have to walk by them to get to her - which I probably could have pulled off but this wasn't a sexy enough scene to risk it. She stood up about 25 seconds later and pulled up her pants, came walking out buckling up her belt. She was about 5'6" with an average build, mid-20's with long brown hair in a ponytail and a very cute face - kinda wished I had gone for her shot! She was much happier and more relaxed with her bladder now empty as the 3 walked off, I went back to the car and could see the outline of her puddle by the front tire on the already wet pavement from the earlier rain.

Mariah Carey's toilets: Saw a story on AOL last week about Mariah Carey and her big house, she was asked how many bathrooms are in the house and she said she didn't know because she's never been in all parts of the house. Among the reader posts that followed the story was one from a guy who wrote, "Mariah Carey is so f'..in hot I'd be her personal toilet if she doesn't know where her bathrooms are!" Can any of you relate to this? Wonder if this guy is a visitor of my site!