A Desperate Lady Was Holding Her Fanny. Pee Sightings.

Dear Readers,
I get 2 sightings of women pissing last weekend to likely finish May with 11 pee sightings and no pictures, about on it's average in pee sightings (11.5). 22 sightings of women pissing for the year, the exact same as last year on this date to start June.
Another web page report this week as I snap another piss puddle picture, yes it is way past time to be snapping and reporting about pee sightings pictures instead of piss puddle pictures but the picture opportunities haven't appeared yet this year (my last picture was September 29th last year). A part of me believes I'm a victim of my own success, that my website, desperatewomen.com (not available now) has inspired so many pee websites featuring outdoor pictures and videos of desperate ladies (about 98% of those posed model pictures instead of the real ladies in actual emergencies like I get) that more ladies are aware of the appeal of female outdoor peeing and are making more deliberate efforts not to be caught doing anything that could wind up on a website. I did snap a picture of 2 sexy ladies walking towards me (front picture) to test the new camera's results with people in night scenes and I loved the results - best night picture I've snapped with any camera in sharpness and detail with the subjects lit just enough to bring them out clearly (even their faces) with visible background scenery and the light from the flash looking natural - didn't have the typical 'washed out' look you sometimes get with flash pictures with the close up subjects being too bright and the background scenery too dark and even at 800 ISO setting (almost said "film speed", which no longer applies) the picture was smooth like a lower ISO and not grainy, although it does get grainy when enlarged. The ladies didn't even notice the flash because it was quick and not real bright because the higher ISO speed didn't need that and it brought out more of the background detail with less light because of the extended flash range of the 800 speed setting. This makes me even more excited to see what this camera will do with that 1st peeing lady when I finally do get her, which we know is going to happen at some point...there should be lots more outstanding visible stream pictures! My June preview follows this week's stories and my suddenly-included digital photo tips.

It was another comfortable spring weekend with night temps in the 50's. The crowd was not as big as last weekend's and had nowhere near the bladder energy, Saturday night's crowd was certainly big enough to produce more than the 2 sightings of women pissing it did. The RTD station was responsible for a lot of that, not only are more people riding that late 2:20 a.m. bus but about 7 really desperate ladies went into the building late for emergency relief. The most frustrating thing was Friday night, a really desperate petite lady in jeans bent over holding her crotch was heading over to the pee sidewalk with another lady and guy. She was definitely going to pee but the guy pulled on one of the terminal building doors as they passed the building and found it unlocked and unfortunately she hurried in and down the escalator to the bathrooms with the other 2 following her.
Spring sexiness is starting to return to the area, a lot of ladies wearing short skirts and dresses that were too short, or had slits in the back that were too high and showed their panties - no accident, I believe. That stuff still keeps me entertained between sightings of women pissing because the ladies are usually pretty and I had the added excitement of a couple of pretty ladies grinning at me. I kept thinking about how what creates all the magic for me here is seeing pretty ladies dressed nice being desperate and peeing, how it wouldn't work if the ladies were fat, unappealing, or dressed like slobs. Then a strange thing happened, my thoughts were put to the test - one of the most unappealing ladies I've seen here was the night's final sighting! Both of the sightings of women pissing were late Saturday night in the middle part of the pee sightings area, the piss puddle picture was from the weekend's final sighting - both that sighting and the piss puddle picture were unexpected. Stories:

Sunday, 2:07 a.m.- At the north end of the RTD station block I saw a guy in the alley across the street, standing by the back of the corner building like he was waiting for somebody. Since I didn't see another guy peeing (guys don't try too hard to hide themselves) I figured it was a lady and waited them out. Sure enough about 15 seconds later a lady pops out from around the corner of that building, zipping up the front of her knee-length shorts. They came out of the alley and crossed the street and walked by me, they were early 20's. She was petite and slim with long brown hair and glasses, red hooded pullover sweat top and sandals with her navy plaid cuffed knee length shorts. She was very cute and innocent looking, kind of nerdy - I love to see ladies like her bursting to pee, the type who seems like she would never pee outside and doesn't know how to but she had a bad emergency, which it always is when the lady's desperation forces her to stop somewhere and pee but the boyfriend doesn't! I crossed the street and went into the alley to look for her piss puddle, another big construction dumpster has been set up behind that building and the back of the parking lot next to it. The sidewalk between the back of the building and side of the dumpster was soaked from lots of people peeing there, which is the area she came from.

2:20 a.m .- Walking up the back sidewalk by the RTD building I stopped and looked at the pee sidewalk, where I have yet to get a female sighting this year. A piss puddle was there that looked like a guy had peed, I went out past the terminal building to near the corner by the shuttle bus stop. 2 police cars were near the middle of the block still keeping a drunk disorderly guy they cuffed and arrested nearly an hour earlier lying face down in the street, most of the people who had been there gawking had left. Among those still watching were 2 ladies across the street at one of the bars, they crossed the street to the RTD block passing me. They were late 20's/early 30's, one slim and average height with long brown hair and the other very fat with short blonde hair wearing white capri pants carrying a pizza in a box they had gotten from the bar. I was looking at the fat lady and thinking how if she were to pee I'd have no interest in seeing it, as they passed me the fat lady was talking about how painful something was. "I understand" the other lady said trying to comfort her. I watched as they walked past me to the shuttle bus stop area, nobody appearing to be in any distress, when suddenly the fat lady pointed over to the pee areas. The ladies detoured and walked over towards the back sidewalk, I started laughing as I was just thinking about this! They stopped by the pee sidewalk with the fat lady staring at it, she handed the pizza box to the other lady and went down the sidewalk - can you believe this? She stopped right by where the male piss puddle was that I just saw, looking over at me with her arms moving (pushing down her pants) before her head went down below the grass next to that sidewalk that is about 4 feet above the sidewalk. The back of her head quickly reappeared as she was leaning against the wall and peeing in a bent-over position instead of squatting, which usually indicates a monster piss for a lady who doesn't want to splash herself. After about 15 seconds she stood up, then squatted back down like she was peeing again for about another 20 seconds before standing up and this time walking away from her piss puddle. The 2 ladies walked out and back past me to the corner, where they quickly flagged down a cab and got in and left. The fat lady didn't seem any different than before, never really showed any signs of desperation other than the part of her conversation I heard. The terminal building was still open and she could have gone in, but presumed it was closed and never tried to go in - some ladies do that so I need to continue to watch this area and not assume every desperate lady is going to know the building is still open and go inside and use the bathroom. I had no desire to go over to see or snap a picture of this lady's piss, which I probably could have done if I really wanted her - although it would have been very risky with 2 police cars out on the street just beyond the terminal building. 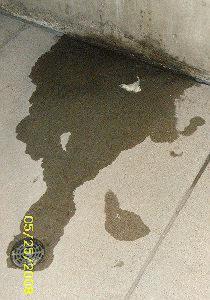 Before leaving I went over to look at her piss puddle. She peed over the male piss puddle and made one more than twice as big, was even bigger than it looked because it ran into a drain in the middle of the sidewalk - no surprise there as I'd figure big fat women have huge bladders and take huge pisses when holding it to the point of desperation like this lady did. Her wet footprints are to the right of the piss puddle (especially the big footprint near the drain) from stepping away from it after she peed, her shoes getting wet from the growing piss puddle running underneath her spread feet (straddling each side of the piss puddle by the base of the wall) while peeing - something nearly impossible for ladies taking a big piss on the ground between their spread feet to avoid. But whaddaya know, in her big piss puddle was another crumpled-up pee-soaked napkin she left after wiping herself after she peed! That's why she went back down for the 2nd half of her piss, that makes 4 ladies the last 2 weekends who wiped themselves and left the pee-stained napkins in their piss puddles (this one totally pee-soaked and probably toilet paper instead of a napkin), as many as I can remember seeing in any year - but I've never officially kept track of that. I guess that will be the trend for this year's ladies, so I'll pay more attention to it during the summer months. For that reason I snapped this picture of her piss puddle, are we all kind of demented to find something like this interesting? I'd like to think it means we're more thorough observers of ladies and the things they do!