Dear Readers,
2 sightings last weekend as the weather was warm enough for a 2-night weekend of work, but only Saturday night was productive. 6 sightings for April and 11 for the year, better than the 1 April sighting and 5 for the year I had on this date last year. A puddle shot of the weekend's 1st sighting is included today making this a web page report, nothing exceptional about the puddle but there is a special reason I included it this week which I will get to later.

The effects of the slow economy are really becoming apparent in the sightings area. Friday night's crowd was so small it again seemed more like a weeknight, I did see several guys peeing but no ladies. Temps were upper 40's Friday night and upper 50's Saturday with a much bigger crowd as it's becoming clear more people are choosing Saturday night as the night to go out, but it's still too early to say if it's a trend - I'll have to see that continue through the summer months before it's official. The ladies who peed Saturday night once again were really desperate, making the sightings good - love to see ladies at that point! Police closed off streets to the busy block in the busy area at closing time Saturday night, with the busy block in the slow part of the area being closed off all year - which I'll now call the 'south area' instead of the slow area since it's not 'slow' anymore - the area is now saturated with more cops than it's ever been. There are even 2 police cars that spend some time by the RTD block, making it a really tense environment to try to snap any shots. I imagine it will get worse as the summer months arrive, I will be extra cautious about snapping shots this year. But this week's 2 ladies managed to find places to pee where they wouldn't be seen despite the police presence, as the ladies usually do - I'll again rely on their amazing instincts for finding secret spots to pee for shot opportunities. On to the 2 brief stories:

Sunday, 1:27 a.m.- I was walking by the RTD block on its back block by the administration building, looked up the back sidewalk as I passed by. I saw a guy standing by the garden area by one of the trimmed trees, as I looked over to the trees for somebody peeing I saw the lady on this lighted sidewalk (leading to a locked storage garage door), she was in a sitting position (side view) with her back against the wall right above her pee puddle with jeans pushed down to mid-thigh. I was probably 60 feet away, only saw her because the area was lighted and she didn't see me because she was looking down at her very intense piss. After a few seconds the boyfriend looked over at me so I walked past the building out of their view and waited for them to leave. They walked down the sidewalk in my direction and past me as they crossed the street, they were late 20's with the lady being about 5' 8" and slim with short brown hair and tight jeans - a trendy model-looking type. She was laughing and much more relaxed now that her bladder was empty, a lady is really in bad shape when she pees and the guy is waiting for her - that's the most embarrassing situation for a lady! 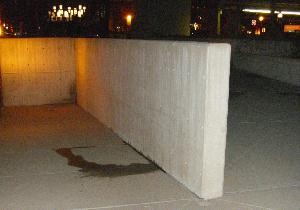 I walked over and snapped this shot of her pee puddle, an above-average sized piss. I kept the light above the door out of the shot so it didn't conflict with the light from the flash (off the upper left of the shot above the top of the wall), included this shot today because it's the first with my new camera which I got last week. I've been testing and becoming familiar with it all week, this shot was snapped with manual settings that I can set the camera to for night shots that should produce better results than the auto settings: the shots will have more light and better detail. I like the way this one came out, more about this later!

2:14 a.m.- At the north end of the RTD block I saw a group of 4 people standing on the corner across the street trying to flag down a cab. One of the ladies seemed pretty animated, a petite slim early 20's long-haired blonde wearing a below-knee denim skirt. She couldn't stand still and just kept bouncing around, one of the guys finally pointing at the steps by the corner (vacant) office building. Without hesitation she turned and ran down the steps to the basement patio office windows, the guy moving over and standing guard over the stairway entrance. After about 35 seconds he moved away and she came running up the steps, stopping on the sidewalk after coming out and pulling her still hiked up skirt back down into place. It was about 15 minutes before they got a cab and left, I crossed the street to there and looked over the railing where I saw her pee puddle not far from the bottom of the steps. Ladies going down these steps usually go to the back of them by the office windows, like a lady I snapped here a few years ago did (desp158 in my website sample album) as this is the same staircase.

New camera: you can skip this part if you aren't interested in this aspect of my sightings work.

I got the new camera 2 weekends ago, wintery weather that weekend kept me from going out for sightings and gave me a week to get familiar with the camera before taking it out for its first weekend of sightings work. Having my other digital camera first is a definite plus in helping me understand now the many more capabilities this camera has and how to use them, many of them wouldn't have made sense to me if I had this camera first. The bigger zoom lens (38-190mm) and larger ISO film speed range (50 to 1600) I did understand because they were a big reason for picking the camera, my 1st digicam had a 38-105mm lens and ISO 100-400 film speed range. The new camera has more intricate shooting modes and special effect/in-camera editing functions that I wouldn't have understood a year ago, but I know exactly what they are now. Colour, contrast and sharpness can be adjusted just like it's a TV set, which these cameras actually are now because it's the same digital format that is being used for TV broadcasts. The lens and focusing system is much better and faster than those in earlier digital cameras, after settling on the shooting mode I will use for most of my daytime shooting every shot has been sharply focused with none of the surprisingly blurry shots I sometimes got with my 1st digital camera. Its pictures are brighter than the 1st camera in both daytime and night shooting, it has lower aperture (F-stop) settings that let in more light so faster shutter speeds can be used for brighter and sharper shots. It's much better suited to my spontaneous, spur-of-the-moment style of photography where I snap shots quickly without taking much time to compose them, a technique mostly learned from having to snap my sightings shots quickly with my 35mm camera before the ladies finished or saw me and stopped. My 35mm camera was great at this kind of shooting because it's autofocus system was quick and it had no shutter delay, my 1st digicam had both a slow focusing system and shutter delays on about 1/3 of my shots. The new camera has shown no shutter delay so far, fires quickly on everything I've shot allowing me to once again get the spontaneous kind of shots at just the moments I want to snap them. My 1st digital camera is much better at posed photography where the subject isn't moving, giving it's slower autofocus system more time to focus on the subject.

The new camera has a manual mode that allows you to set all the camera settings manually, rare for a compact digital camera. I use it for night shooting, setting it to a faster shutter speed and higher film speed (ISO 800) than it's auto mode would set, which produces much better results in night shots. I tested ISO 1600 at night but the pictures are too grainy, 800 speed is slightly more grainy than 400 but the extra brightness from the extended flash range more than makes up for it in better picture detail since digital camera flash is much weaker than 35mm camera flash.

I'll be able to use the expanded zoom lens on the new camera much more than I could on the 1st digital camera, the loss in light from the smaller aperture at zoom made virtually every shot taken with the lens zoomed on the 1st camera blurry because of the slower shutter speeds. I couldn't use the zoom at all at night because of this, had to shoot all my night shots at wide angle and enlarge them in the imaging software. The new camera's lower aperture settings allow more light in when the lens is zoomed so it can use faster shutter speeds and still get sharp images, zoomed images are slightly darker at night but still bright enough that I can use the zoom - although I'll still get the brightest results by shooting night flash shots at wide angle. Digital camera flash is much weaker than 35mm camera flash and has much shorter flash distances, you have to be closer to your subjects - the reason why this is such an issue with digital. I don't use the digital zoom feature, it's software-generated enlargement that lessens the overall quality of the picture. Optical zoom is the real zoom capabilities of the camera and the one to rely on.

The camera also can display the camera settings for each shot, a feature I like because it tells me what settings work and what I need to change them to next time on shots I don't like. This camera has much-improved video capabilities too, it can pause shooting and resume (so you don't have to shoot 2 videos of something) and can shoot video in 340 or 640 pixel sizes - much better capabilities than the other digicam which I will test at some point. The only partial negative is that I don't like it's computer software as much as that of my other camera, that camera (Hewlett Packard) was made by a computer company so its software is better while this camera (Samsung) was made by a camera company so the camera is better. But the Samsung software does have extensive video editing capabilities so I'll be able to edit videos of whatever I shoot with the camera and I can use the HP imaging software on the Samsung camera's pictures (I'm keeping both in the computer). The best part is that the new camera cost $70 LESS than the other camera and it's twice the camera the other camera is. My goal is to shoot a good video of a sighting this year, if I can make it into a small enough file with good quality so that it's a fairly painless download I'll send it out to you readers.

Looking forward to that 1st shot of a peeing lady so I can actually see what this camera produces with a person in my night shots. I got a few perfect stream shots with my other digicam, this camera should produce more of them from scenes the other camera couldn't do very much with!