Free Picture of a Lady Having a Peeing Accident!

This was a very frustrating night, nothing but men peeing with the few ladies who had to pee going into bars or getting in cars and leaving. As usual I didn't get my sightings until just before leaving for home, fortunately I got another 2 ladies peeing for the effort of 1. Continue Reading 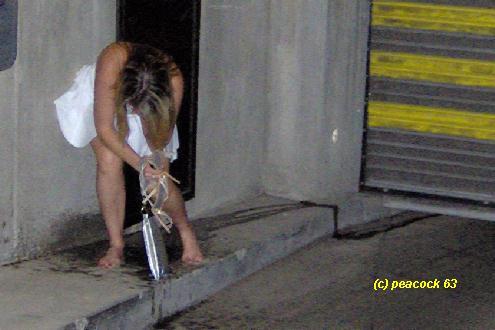 Album 13 preview:
It's now ready, this is the full-size shot from it that is in my website sample album - desp 224 This is the lady from June who passed me on the RTD block, that I followed to the parking garage driveway on the next block where her bladder exploded. After thinking about this lady's actions that night and studying this shot, I'm now concluding she had a peeing accident! She felt her bladder starting to bust and that's when she ran into this driveway, her pee started coming out in an uncontrollable torrent almost immediately - happening so quickly she didn't have time to pull down her panties and squat and just stood there helplessly peeing in this position. Her hands were occupied with holding her shoes and purse and covering her face when she saw me and the camera, I did a close-up enlargement of her sexy spaghetti-strap white see-through dress by her right arm and hip area to see if her panties were visible there since they weren't pulled down and bunched up anywhere on her thighs. It's a darker white around her hips and crotch area where her panties would be, looks like they are there in their normal place - which means she didn't pull them down and was peeing through them in this shot, making this a peeing accident! She probably thought she could hold it, was forcing herself to hold it past the bursting point because she didn't want to pee outside - probably doesn't know how to, like a lot of ladies! This is my 2nd accident shot, the other lady (desp 139) I snapped after she finished and was walking away in her pee-soaked pants - but I got this lady while she was still peeing. What a sexy summer this has been, reflected by the sexy pee shots of the ladies in this album - including the pretty squatted blonde in the black skirt and high heels from last weekend! You can get a listing of all the shots in this album at my website , you should remember them because you got all their stories after they happened!