Dear Readers,
3 sightings over the weekend, giving me 7 for June and 24 for the year. I was surprised to see I've already done better than June last year in just the first 10 days of this month, I had just 6 sightings in June last year as June and July sightings have dipped in recent years. 19 sightings on this date last year, so while this year seems to be rebounding from the last 2 bad years let's put this in perspective: my 19 year average is 35 sightings by the start of June, I'm still well below that this year.

A puddle shot this week, making this a web page report. None of the 3 sightings was particularly memorable because the ladies were hidden from my view, but 2 of the ladies peed near each other's puddles and 1 was kinda unusual so I snapped a shot of them - more in their story. Night temps were in the low 60's and I'm starting to see that sexy summer energy in the ladies I love, Saturday night's crowd was the 2nd biggest of the year so far while Friday night's was the 2nd smallest, Saturday nights are definitely the night of choice for most people to go out this year. Late-hour lady counts reveal the crowd size is about the same per night as it was in June last year, 3 of 5 months this year the sightings area crowd average has been greater than last year's. Stories:

Saturday, 2:38 a.m.- Nothing tonight until I was leaving the area. Because of my new parking spot outside of the main downtown area where they now charge for overnight parking, I enter and leave the area by the busy block at the north end of the sightings area. I was walking through the busy block on my way out of the now mostly-empty area, 2 couples were standing outside one of the closed bars talking. The 2 ladies crossed the street to the buildings on the other side of the block, one of them seemed to be looking around like she was looking for a place to pee so I watched. Sure enough she went into a dark gap between 2 buildings, her intentions clarified by lady 2 standing guard in front of the gap. I looked at the ground by lady 2's feet, after about 10 seconds a stream came running past her feet from the gap between buildings behind her. She moved aside after another 10 to 15 seconds and lady 1 came out, petite with below-shoulder black hair wearing jeans. I started walking off then since it was too dark between the buildings to see her puddle, they crossed the street back to their boyfriends just before I passed the group and her boyfriend asked her if she just peed and she said yes.

Sunday, 2:17 a.m.- Among the huge crowd I was disappointed no ladies had peed yet. I was at the RTD building's south end watching that corner lot across the street, when 2 ladies turned up the street south of there (by the shuttle bus stop). One was a chubby lady in tight jeans and the other wearing a yellow top and black leggings, the chubby lady was staggering and seemed uncomfortable as she made her way up to the doors of the high-rise building there but couldn't get in. I watched as I thought she probably had to pee, they staggered down the sidewalk. Several guys had gone into the alley they were about to pass earlier and peed by the back of the building, I watched to see if they would too. As the chubby lady passed by the alley she turned in, with lady 2 following. I watched her struggle halfway down the alley before going up in a doorway, grabbing the front waist of her jeans before disappearing out of my view. Lady 2 stood guard in front of the doorway facing the alley (side view to me outside the alley), I looked at the ground by her feet as I did last night's lady. It was only about 5 seconds before I saw 2 thin streams come out of the doorway and run past lady 2's feet to a drain in the middle of the alley, she really had to pee bad! It was about 30 seconds before she came out, snapping up the front of her jeans. Lady 2 then went up in the doorway with the chubby lady standing guard in the alley, such techniques foil any shot possibilities for me: why didn't they pee together so I could go over there and snap a shot? Again I looked at the ground by the chubby lady's feet and after about 5 seconds thin streams ran past her too to the drain in the middle of the alley coming from the doorway behind her. Lady 2 came out after about 25 seconds, pulling her yellow top down over the waist of her leggings. The 2 ladies walked out of the alley, the chubby lady walking much easier now. I went in and over to the doorway to see their puddles, expecting that they peed over each other's puddle. But no, the doorway was wide enough each lady went to far ends of it and peed so I snapped a shot of the 2 puddles. 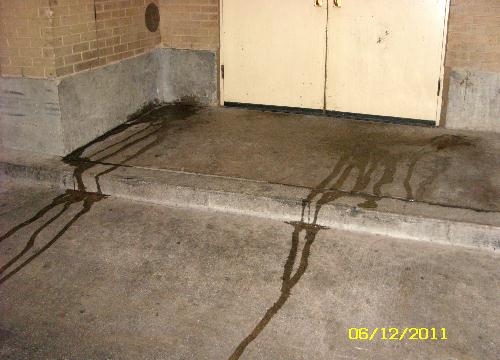 After looking at this shot I was puzzled by the chubby lady's puddle (on the left in the corner). Female puddles are distinguished by no wetness on walls or vertical objects by the puddle as you see in men's puddles, as you can see here the walls on each side of the puddle by the corner are splattered - what happened, it looks like a man did this! I didn't see her make this puddle, but know she did it. What must have happened is that she didn't squat down, probably bent over and leaned her naked butt against the corner walls. She peed straight down behind her feet, her stream flowing the longer distance to the ground would then splatter like a man's piss and splash the base of the wall on each side of the puddle. A man doing this, the splattering on the wall would probably be right in the corner (where he'd likely aim his stream) and not on the sides of the puddle as the lady did here, women just have different dynamics to the puddles they make! Lady 2's puddle, lighter and harder to see by the far right side of the yellow doors, looks like a typical female puddle made by her squatting down. It looks bigger than the chubby lady's puddle but that could be deceptive, since the chubby lady peed in a tight corner and her stream originated higher above the ground while lady 2's stream originated from her squatted butt right above the ground and could explode into a big puddle immediately. Both ladies had above average sized bladders and looking at these puddles, were full and really had to pee badly!