Ladys piss puddles at the parking lot, a pee sidewalk, down an alley!

I'm happy to say September starts with 5 sightings in it's first weekend, reminding me again why I continue to do this! My first 5-sighting weekend since June, didn't get this many in any July or August weekend. 75 sightings for the year, 10 ahead of last year on this date and right about on pace for 100 sightings this year.

While I'm happy to get the 5 sightings they weren't great sightings as I wasn't able to get close enough to see the ladies pee or hear splattering. But 2 of them who peed together made a nice puddle peeing on steps, a shot of it included today making this a web page report.

A seasonal mild weekend with night temps in the mid-60's, it's gradually getting cooler so jacket weather isn't far away. A smaller than average crowd Friday night about the size of last Friday night's August crowd, Saturday seemed smaller but my late-hour lady count revealed it was bigger by just 82 ladies. But overall the weekend crowd was about 150 ladies more than the average for September last year, so like last month it looks like there will be more potential because of the bigger crowds - let's hope those extra ladies pee this month unlike July and August, when fewer ladies from the bigger crowds peed. 1 sighting Friday night and 4 Saturday night, stories:

Saturday, 2:02 a.m.- In the parking lot across the street from the RTD block I saw a 20's couple walking through the parking lot to the alley and back of the building next to the lot. I crossed the street into the lot as they disappeared behind the building into the alley, going back to where I could see in the alley saw the guy by one of the dumpsters back there. As I turned to walk out of the alley and watch from outside the lot I saw a police car sitting in the alley across the street from there, facing the alley...the cops could see everybody going into that alley to pee! I walked further down the sidewalk outside the lot out of their view, didn't want to act too interested with them there. But now I couldn't see where the lady was peeing, the guy came back into the lot about 20 seconds later and went to their car in the lot and got in. The lady walked into the lot about 20 seconds later and went to the car, she was petite with short brown hair in a ponytail wearing jeans, had probably squatted behind the other side of the dumpster I saw the guy peeing by. Other guys were coming and going into that alley to pee but the cops didn't seem to care, I guess catching people peeing has been designated a 'low priority offense' and they won't go after anyone unless they're blatant about it.

Sunday, 2:00 a.m.- I had just arrived back at the RTD block and was walking past the park area in the middle of the block. Looking over to the pee sidewalk I saw 2 ladies get up from sitting on the short steps there and walk across the grass to 2 waiting boyfriends sitting on concrete blocks in the middle of the patio area. Did they pee over there? I walked over to see. 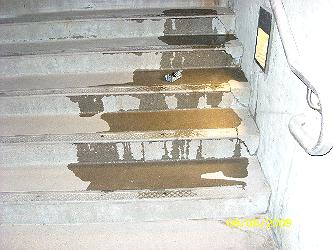 I found their pee puddles on the steps behind the pee sidewalk, they had sat down on them and peed. Most of the administration building is under construction, including the pee areas. Blockades are even set up in front of the pee sidewalk and above these steps behind it where they peed, instead of going past them and squatting on the sidewalk they just used the steps. Nice to see a big puddle again, among all the ladies the last few months who were able to hold their pee it's nice to finally see 2 who couldn't! I know lady 2 peed on that 2nd step at the top right of the shot, that's where she was standing up from when I saw her. But the puddles on the steps look too big for these 2 ladies to have made by themselves, but they could have since I didn't see them until lady 2 was finishing. I think they peed 1 at a time since I don't see 2 puddles, lady 1 likely peed before her on one of the lower steps and lady 2's pee ran down the steps and covered lady 1's puddle.

2:15 a.m.- Back out to the shuttle bus stop end of the block near the pee areas, I again looked into that corner parking lot across the street. I saw 2 early 20's black ladies in jeans walking through the parking lot towards the alley like the Friday night couple did, I again crossed the street and went into the parking lot back towards the alley. No police car was sitting in the alley across from there tonight, so I could stand where I could see the ladies. They were squatted between the first 2 cars in the lot in the row by the alley and building, lady 1 was just finishing and standing up and pulling up her jeans and I could see lady 2 squatted behind her. She peed another 5 seconds before standing up and pulling up her jeans, both came out giggling and went back to their car parked in the lot.

Okay, I'm again energized for next weekend. Don't know yet if it's an Oktoberfest weekend of if that's the next weekend, or it might be called off this year because of the bad economy - I'll find out during this week.