Night time sightings of ladys who need to pee

What is it about September? 6 sightings to begin the month on Saturday night, just a lot of energy in the crowd. It's been like that about the last 5 years, making September my best overall sightings month over that span (pictures and sightings). I finish August with 18 sightings and now have 54 for the year, I'm starting to think about my record low of just 75 sightings I got in 2010. Will this year be worse? September could put a big dent in it, and if I go out a few times in October I should do better than that.

The first sighting this weekend was fabulous, my favorite kind of sighting! A puddle shot of this lady's piss is included today. The sighting is among my best ever among the now 2542 overall sightings I have. Another sighting this year makes that list too, pretty amazing to get 2 hall-of-fame sightings in such a lean year, considering some years I don't get even 1 pee sighting of this caliber. So what makes a sighting stand out and be something special for me, considering I've seen so many? I'll talk more later about that, it's an interesting question - and I want to see how many of you will agree with my thoughts on it.

Last year on this date I had 82 sightings, would finish September with 21. I got 3 sightings on the first September weekend last year, the crowd Saturday night more than 100 ladies bigger than this night last year, a 14% increase. With Oktoberfest coming it looks like a big September of sightings is in store, if the weather holds up - it usually starts getting cooler in September and it's forecast to by next weekend.

Sunday, 1:24 a.m.- Making my rounds through the south end of the sightings area 3 ladies and a guy, all mid to late 20's, were walking across the street from me. All 3 ladies were wearing tight black miniskirts, which of course had me looking at them. All the ladies were about 5'7" with slim to medium builds, suddenly one of them got panicky.

"Oh my god, oh my GOD!!" she said, pressing her hand over her bladder just above her crotch. Did she have to pee? As the group was crossing the street to the next block she took off running, her hand still holding the front of her skirt over her bladder. I jogged across the street (still on the other side of the street) so I could see where she went, I felt something wonderful was about to happen here. She ran to the last doorway of office buildings right before the alley and turned around to face the sidewalk with her back to the door, quickly hiked up her skirt and yanked down her orange panties and squatted. I was almost directly across the street, started unzipping the camera bag as already a pee stream was running out from underneath her across the sidewalk. I started to cross the street but she was staring right at me, 2 other people were about to pass by her so I stopped where I was to just watch. Her thick stream made it's way across the doorstep and down 3 steps to the main sidewalk, this was a big piss! The rest of her group was now there, one of the other ladies said "I can't believe..." before the peeing lady interrupted her.

"Don't judge!" she said, as she was finishing (about a 25 second piss) and stood up and pulled up her panties. The guy went past them and into the alley, going to a dumpster to pee. The peeing lady started laughing immediately. "I should have gone into the alley, I just couldn't!" she said. The guy came out about 30 seconds later and the peeing lady mentioned that she had gotten a ticket for urinating in public before. "I had to register as a sex offender!" she said, not seeming concerned about it.

I remember what she's talking about. A few years ago the prosecutor in a nearby college town decided as a way to stop the college kids from the stupid things they did when they got drunk (streaking, peeing) that nearby residents complained about he would say since they exposed themselves in public these were "sex crimes" and they should have to register as sex offenders. He got convictions of several college kids before the State Legislature intervened and said this was not the spirit of the sex offender laws, to put kids on the sex offender registry for annoying pranks that were not sexual in themselves. That clarification was added to the law the next year, but this lady must have been among those prosecuted by this overzealous D.A.

1:27 a.m.- I wanted to snap a shot of this lady's puddle but had to wait for a few people to pass. Among them were a group of 2 ladies and a guy, early 20's. One of the ladies, petite with below-shoulder curly brown hair wearing jeans, suddenly grabbed her crotch as they passed the alley and ran into it, lady 2 - petite with short black hair wearing black leggings - went in after her. They went to a dumpster in a driveway about 2 buildings down, the lady in jeans disappearing beside it as lady 2 stood guard. But after a few seconds she grabbed the side waist of her leggings and went behind there too, both ladies came out about 25 seconds later to the guy waiting outside the alley and the group walked off.

My last sighting in this alley was May 2009, before that April 1995: 14 years earlier when that part of the area was busier, the building next to the alley where the 1st lady peed wasn't there then. Shows there continues to be potential in every part of my area, I can't forget about any of them. All it takes is for ladies to be there, which is what creates the possibilities for sightings! 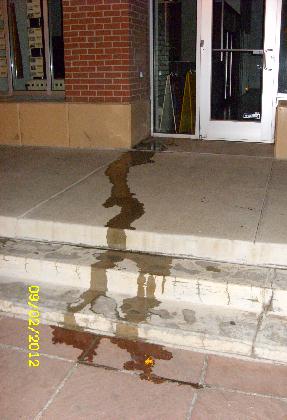 Look what she did! I then went over and snapped this shot of the first lady's puddle. She was in the back corner by the door, would have been facing me from this angle and looking at me so I couldn't snap this shot while she was making this puddle. Big piss, her stream running out across the sidewalk and down the steps. A couple of people walked by while she was making this puddle, she was peeing too hard to stop.

Favorite sightings: Too many times I see ladies take weak little pisses or change their mind and not pee at all. I love sightings where the lady is so desperate she is losing control of her bladder and has to pee immediately, regardless of who might see her doesn't have the option of not doing it and waiting until later because the pee is coming now - like this lady who made this puddle. She pees a very forceful stream that makes a huge puddle, or badly soaks her clothes if she pees on herself. She is pretty and dressed nicely, preferably in a short skirt or really nice dress. This sighting had all those elements, as did another one this year...

The pretty Latina lady in a short dress in June who broke down on the sidewalk right after leaving a bar at closing time (my June 4 report). She started peeing on herself and went over by a tree on the sidewalk and tried to pull her panties down, but peed all over them before she could get them out of the way. She took off her purple lace pee-soaked panties and threw them in a trash can by me, and now I have the panties now as a powerful reminder of this wonderful sighting (I had to wash the stench out of them, the front half and crotch of them she soaked with her pee was very stiff when they dried). The only negative with these sightings is I can't get shots of them because people are watching, since the ladies are peeing out in the open in front of them. Puddle shots are the best I can do with most of these.

The ladies who do manage to get to a private spot, I've gotten shots of several of them because they're peeing so hard they can't stop even if they see me and the camera. It's just killer sexy to see this happen to nicely-dressed pretty ladies, I'm so lucky this is something I really get to see and not fantasies in my mind!

One day I'll write a report of all my most powerful sightings like this. Don't know how many of them there are, I suspect probably more than the few on my mind now once I go through all my stories and shots.

1:58 a.m.- Over at active alley all was quiet until I saw a 20's couple tentatively enter the alley. The girlfriend, a slim blonde in black shorts, was the one looking around and pointing down the alley. Bar employees were out in the alley emptying trash cans into the dumpsters, that made her decide not to go down the alley. 2 cars were parked in a small parking lot behind the corner building of that alley, she went between the front of one of the cars and the building and squatted down as the boyfriend stood guard beside the car. She took about a 20 second piss before coming out, then he went over and peed over her puddle.

2:30 a.m.- On the RTD block I saw a group of people across the street turn up the block. 2 ladies veered from the group and went into the alley behind that corner bank building, I immediately crossed the street and went over there. A few cars park in that alley, people were loitering around there. The 2 ladies walked past them and turned into an area behind a parking garage there, I didn't go in after them because of the other people in the alley. The rest of the group with them (2 ladies and 2 guys) walked up on the sidewalk by me, I heard one of the ladies say the other 2 had gone into the alley to pee - again verifying my instinct. It was a couple of minutes before they came back out of the parking garage area, it's another place where I haven't gotten a sighting in years. Both ladies were fairly tall (5'8"-5'9") and chubby, one wearing a brown sheer dress and lady 2 a long light-colored dress.

OK readers, what kind of situations make up your favorite sightings? e-mail