She quickly pushed her pants down and squatted to piss.

Dear Readers,
2 more sightings last weekend, and another web page report as I get another good puddle shot. Since I decided this month to start including shots of big puddles to spice up my late-year reports suddenly big-bladdered women are peeing around me, all 4 of the November ladies so far! 4 sightings for November and 125 for the year, I now have 1999 documented sightings since beginning my sightings work in '93 - astounding numbers to me that I never imagined getting when I started doing this what seems like a lifetime ago. Unlike last weekend I didn't have a chance at shots of this week's 2 ladies, but like last week I did snap puddle shots of both since they again took big pisses. The night's final lady took the year's biggest piss which is the one you will see here, big pisses makes the sightings much more sexy because it makes the ladies appear to be more desperate.
I went out only Saturday night last weekend, Friday night was too cold. Saturday night temps dropped only to the mid 40's, I was expecting a small crowd for a mid-November night but was surprised to see a crowd close to the size of a late summer night with parking lots mostly full throughout the sightings area. The difference this time of year is that the crowds leave earlier, lots fewer people (ladies) hanging around after closing time as they do during warm summer nights which reduces late sightings potential. I discovered the area is losing another parking lot block, another one is fenced off for construction of yet another hi-rise building. This one is on the block southwest of the RTD station, a sign on the fence has a picture of the building to be built. This lot was active during the '90's but has not been productive in recent years, my stats revealing no sightings there since I got 5 in 2002. What's happened? A bar was built behind the alley from this lot in 2002 and that stays open past 2 a.m. and has become late-night emergency relief for pretty ladies walking by from nearby bars desperate to pee who used to go in this parking lot (I've snapped 4 shots there, the last being in August 2000). I spent some time Saturday night walking past all my once-active lots and spots that are producing few sightings now, a popular bush behind a building now has bright lights shining on it! Interesting how the popular spots in my sightings area have changed over the years, but even more amazing how I've continued to keep up with all the new spots the ladies use and consistently get 100+ sightings out of the area each year despite all the changes! That's a tribute to the determination of both the desperate ladies and me: the ladies for their continued determination to find outdoor spots when they have to pee and me for being resourceful enough to keep finding where the ladies go to pee!
Walking behind 2 tipsy ladies Saturday night one of them suddenly blurted out, "I have to PEE!" very passionately - it is so sexy when a lady says that! I followed them but they went into a bar, my 2 sightings would come late - the final one being an unexpected gift.
On to the stories, with the puddle shot included with the last story:

Sunday, 2:00 a.m.- Coming back to the RTD station block's north end from the busy area I saw what looked like a group of people at the pee sidewalk by the south end. I walked across the patio area to there, seeing a lady and 2 guys standing by the entrance to the pee sidewalk with their backs facing it (and me). Had to be a lady peeing there and when I was about 30 feet away, sure enough a petite lady stands up from next to the wall bordering the sidewalk and grass. I saw her bare butt for a few seconds before she pulled her jeans back up over it, she walked out to the others and the group walked off down the back sidewalk to the next block. The lady was early 20's with short black hair wearing a waist length coat and tight jeans, walking up the sidewalk there was her puddle by the wall where she had squatted - much bigger than I would have expected from such a tiny lady. How is it that so many of these slightly-built ladies tend to take the biggest pisses? I snapped a shot of her puddle.

2:39 a.m.- Nothing else happened in the sightings area and I went to my car to leave. I park close to 6 blocks from the sightings area, usually on a street outside a parking lot behind a hotel built across the alley that opened last year with a coffee shop at my end of the block. As I was approaching my car a group of 4 ladies was standing by their car in the parking lot, parked in a space near the alley. They were late 20-ish, in the middle of a very animated conversation after coming from a nearby hotel social event or bar. I was wondering how long they'd been there and if someone might need to pee, when suddenly one of the ladies turned away from the group towards the alley and left the group and walked down the alley. I knew immediately she was going to pee, watched as she went into a back doorway of the coffee shop about 40 feet down the alley from their car. She was about 5' 5" and slightly chubby, wearing a dark pullover sweater and black pants. She went into the doorway and looked at the ground before turning around with her back to the wall facing the lot, she quickly pushed her pants down and squatted. I was now walking by the mostly empty lot on the sidewalk where I could see her, she was looking at me and combined with the other 3 ladies being not far away I had no chance to get closer and snap a shot of her. I watched from outside the lot as she stayed squatted for a long time, finally standing up and pulling up her pants after about 2 minutes before walking back to her friends. They stood by the car continuing to talk for a few more minutes before everybody got in, but they sat in the car talking for about 20 more minutes before driving off. I waited them out because I had to see the puddle she left after such a long piss, finally they drove off through the alley to the other end and I walked over to see her puddle. 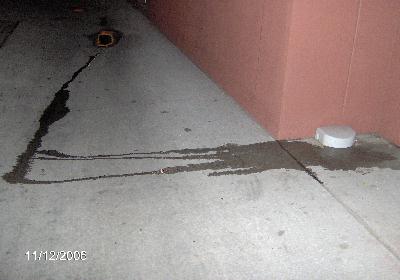 She peed this awesome piss puddle that soaked the doorway where she squatted (next to and behind the white object), her pee streams running out to the middle of the alley before turning down the middle alley gutter. This pee puddle is much bigger than it looks because I had to stand so far away to get all of it in this shot, her pee stream in the middle of the alley did make it to the small puddle already there (running down the middle of the alley about 10 feet to get to it). The yellow/orange outline around the puddle is reflections from a neon light nearby outside the alley. This lady could outpee a lot of men with the big bladder she has, another small lady with a huge bladder who doesn't look like she could hold this much pee! This is easily the biggest female piss I've seen this year, the question I always have when I see a lady take a big piss: how long had she been holding it before finally having to let all this pee out?

Amazingly next weekend looks like it will be warmer than normal for this time of year so I will probably be out again. Looks like November is going to provide me with more sightings opportunities than October did!