She hiked up her dress, squatted and peed right by the building!

I had my weakest ever New Years' Eve, getting just 1 sighting but that was 1 more than I expected. 2007 will start with this web page report because a picture is included here, a picture of this night's only sighting. The shot isn't a good one by my usual standards (for reasons I'll mention later) and won't make my next album, so after working on it and making it as decent as I could get it I decided to give it to everybody free with its story - happy New Year!

As I mentioned last week we got close to 2 feet of snow the week before and it snowed again on Friday (December 29) and we were expected to get close to 2 feet more snow as it would continue until Saturday night. I was planning on not going out on New Years' Eve (Sunday) for the 1st time in 15 years because of all the snow, but it stopped Friday night and the sun was out all day Saturday. We got only about 6 inches more snow where I live, some areas got more (the media made the situation look much worse than it was because the money people were unhappy about being inconvenienced by the snow and having to change their plans). I still was not planning to go out Sunday night and had been working on a backup report I was going to send you today (more about it later), was watching the news to see if the downtown fireworks shows were still on (shows at 9 p.m. and midnight). They had film of the 9 p.m. show, not only was it still on but the crowds looked bigger than they were last year when it was not as cold with no snow! Seeing that I had to go down for the midnight show, planning on being extra careful because of all the snow and ice and not expecting any sightings and pretty much ruling out snapping any shots if I did get any sightings because it would be more dangerous for me if I had to try making a quick exit on ice and snow-covered sidewalks.

The crowds in the fireworks area were incredible, much bigger than last year despite 20 degree temps and 12 to 18 inches of snow banks beside the sidewalks and scattered ice patches on the sidewalks. I worked my way down to my New Year's Eve vantage point (across the street from the RTD station between a parking lot and alley), finally getting there 8 minutes after midnight in time for the rush of people leaving after the fireworks who would be hitting the alleys and parking lots for a piss before making the trip home. The alleys were covered with snow (since they aren't ploughed) and the parking lot was snow and ice covered with spaces lost to piles of snow banks from snow ploughs who cleared the street outside the lot - a situation too dangerous for ladies to try to pee, as I heard a frustrated lady who needed to pee say as she watched her boyfriend and another guy run into the snow-covered alley for a piss. So no ladies peed during the half-hour mass exit after the fireworks, I went to the RTD station to warm up and decide if I wanted to stay for the late sightings crowd as I thought the conditions were too bad for ladies to pee. At 1 a.m. I took a walk through the rest of the sightings area to see how it was, police had closed off the street leading to the busy block. The sidewalks in front of the bars were all shovelled out, but crossing the ice-covered streets was dangerous. Small crowds were in the area, I went back over to the RTD station and decided to stay there since it's sidewalks had been cleared and the terminal building was now closed and it paid off, among the crowds coming there from closing bars a lady did pee. I didn't plan on snapping her shot but it was there on a silver platter and I just couldn't resist!

The shot of her you're about to see with her story next came out dark and grainy, because I was standing by a snow bank when I snapped it. The bright white snow in the lower right side of the picture zapped all the light from the flash and left her, in the background, without any light so the shot looks like a night shot taken without flash. If I had moved completely away from the snow bank the shot comes out good, something I know now as I've never snapped a pee shot around snow before. But there were reasons why I didn't which are in her amazing story: 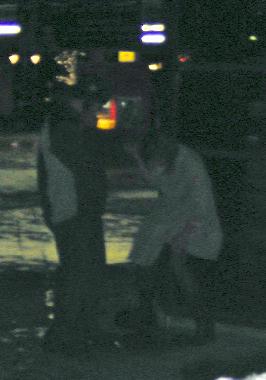 1:48 a.m. (1-1-07, desp 233): Getting back to the RTD station I saw this couple waiting among others at the shuttle bus stop at this south end of the building. The pretty blonde, wearing a loose peach-coloured baby doll dress with no coat seemed to be drunk and not feeling good, or maybe she was cold because she was wearing no coat. The boyfriend was all over her, holding her as she leaned on him. After a bus didn't show up for awhile they walked off, and I went to the other end of the block for awhile before coming back. They were now walking back up to the terminal building, stopping in disbelief after finding the doors locked. They walked up the steps onto the patio area, she was the one drunk so I knew she was the one who had to pee. I followed as they went around one side of the building, but when I got there no sign of them - where did they go? I'd see their footprints in the snow if they walked across the grass to the pee sidewalk, there were no tracks. After looking around the patio area for a few minutes I went back to the south end of the building, seeing the guy standing here by the corner of the building as I was approaching, and seeing her squatted right by him peeing as I got closer! With nowhere to go because the snow and ice made it dangerous to pee in the secluded spots she came back here and she hiked up her dress and squatted and peed right by the building! Lots of people were walking by, I passed them and neither paid any attention to me. People were staring at her so I decided not to try for the shot, but she kept peeing....and peeing....and peeing! Finally after about another minute I turned and walked back by them, looking at her as I passed. She was still peeing, I could see 2 thin pee streams dribbling out of her peehole shooting off toward each of her spread thighs (pee stream deflected by her hanging pussy lips) spraying out into her growing puddle. That was it, she got to me and I had to snap her! I pulled out the camera and turned around towards them, now almost 30 feet away standing by a snow bank. She had finally finished and was starting to stand up, I had to snap her now or lose the shot so I pointed the camera at her and pushed the shutter button. The camera delayed for a few seconds, giving me a message that there wasn't enough light before the flash finally fired. Looking at the shot it was dominated by the bright white snow bank on the right side, with the building where she was peeing in the dark background on the middle and left of the shot. Looking at the shot in the camera LCD window I zoomed it and there she was, but her image was so dark I could barely see her. I edited out the snow bank in this shot (a snippet of it is in the lower right corner) and tried to bring her out as best as I could, but it looks like a night shot with no flash - colors and detail muzzled, not a good shot compared to what it would have been if the flash had lit her and not been absorbed by the white snow bank. Fortunately she and her boyfriend didn't react to the flash, nor did any of the nearby people who saw me snap the shot. The RTD shuttle stop and lights there is in the background, she left an above-average sized puddle that was surrounded by many wet footprints from snow-covered shoes of people who walked by there before she peed.

Bad shot or good shot? Readers, tell me what you think!

Even though this shot didn't come out good this one amazed even me! I am so amazed by how I am able to do this, these was the worst peeing/shooting conditions I've ever been in yet somehow I manage to find a lady peeing and snap her shot - nothing seems to stop the ladies here from peeing! The worst part is there are no do-overs for bad shots like this, the opportunity is there for a few seconds and I either get a good shot right then or it's gone forever. But the best part is that there will be more ladies peeing, more opportunities - just when and where is where the hard work comes in, but the rewards are definitely worth it. I didn't even have time to think about my monthly sightings streak just ending (my last sighting was November 19), thanks to this desperate pretty blonde I quickly start a new streak with my first 2007 January sighting!

Backup report: What I was working on Sunday was a summary of my New Years' Eve sightings, dating back to my first year in '93 up to this year, that I was going to send today if I had no sightings to report. I wrote a paragraph summarizing each year's sightings and shots and the major details that year, it was a really fun read so I will send that later this month as I won't have much to write about the next few months as I head into the sightings down-time during the winter months. My 2006 annual sightings summary next week!