I get 2 sightings & actually get to watch both ladies pee!

Dear Readers,
last week I mentioned that I had gone all summer without any rainy nights washing out my sightings of women caught having a piss as we've been having a much drier year than normal. So guess what happens this weekend?

Yes, rain! It rained Thursday night through Sunday morning, heavy enough rain Friday night that I stayed in but by Saturday night it was light rain so I decided to go out. Why? I knew the crowd would probably be smaller because of the rain but thought my chances of getting a sighting was probably better than usual because these were improbable peeing circumstances for ladies and that's when they usually pee and I was right, I got 2 sightings of women caught having a piss - among the better ones of the year. 2 piss puddle pictures are included in this web page report, not of each sighting but both pictures of the first sighting because it took 2 pictures to show the full extent of the big piss this lady took. I could have snapped a picture of her in the act but passed on it because I only had a partial view of her squatted leg sticking out from beside where she was peeing with the rest of her hidden - more on that in her story. 6 pee sightings for August and I finally get to 50 for the year (51), probably too little too late in my quest for 100 pee sightings this year as I'm 4 behind last year's 95-sighting pace on this date (55). But I tie last year's pitiful 6 pee sightings I got in August, with 2 weekends left in the month should do much better. I didn't get any sightings of women having a piss in the 2nd half of August last year, a real shocker: hopefully I will end the month with 10 or more pee sightings, if so it would be only the 3rd month to produce more than 10 sightings of women having a piss this year. Normally August is the 4th of 6 consecutive months of double-figure pee sightings for me, shows how messed up this year has been - like pulling teeth to get my sightings.

Night temps last weekend were in the low 50's and we set a record-low high temperature for Saturday (58), nearly 20 degrees below the average August high temp for this date. I went down late because I knew the crowd would be smaller and the area looked pretty deserted until the closing hour. It still seemed like a smaller crowd then, but my lady-count showed a few more ladies than on 2 earlier dry and warmer July nights. The 2 pee sightings were just short of 6 tenths of 1 percent of the night's ladies, the 2nd time I've gotten that high of a percentage with just 2 sightings of women having a piss and it indicated the rain didn't affect my pee sightings pattern this year. I'd love to get a 'typical' night of sightings (4 or more) to see what kind of pee percentage that produces in my lady-counts! The Saturday night pee sightings this week had the rare occurrence of happening within a half-hour of each other in the same area, the rain was responsible for that as ladies tend to look for a dry spot to pee when it's raining - although I snapped a beautiful picture a couple of summers ago of 2 nicely-dressed ladies peeing in a rainstorm (desp 230 in Album 13)! Stories, with both piss puddle pictures in the first story:

Sunday, 1:40 a.m.- The drizzling rain had gotten heavier, sending me to my usual place to wait out the rain: at the RTD station block, under the roof at the shuttle bus stop at the south end of the block. As I watched people walking by in the rain, among the crowd a lady walking by herself turned into the alley across the street from the shuttle bus stop. The middle part of that alley is like a tunnel, dry because the buildings on both sides of the alley have upper floors that run over the alley connecting the 2 buildings and shielding that part of the alley from weather. The lady was mid-20's with below shoulder black hair wearing jeans with a backpack on her back, I watched her from the shuttle stop. A loading dock area is behind a building in the dry middle block area, people have peed there before. The lady turned up there and out of my view, evidence she was going to pee so I crossed the street and went into the alley - not getting out the camera because I wasn't figuring on having a picture of her because there are objects there she can pee behind that effectively hide her. I walked by the lighted dock, didn't see her by the dumpsters near the alley but a piss stream was running towards the alley from a post up by the back of the dock by the building, about 40 feet away. It was coming from beside a big concrete post on the sidewalk by the building, I walked a couple of steps further past it to see if she was visible, saw her right squatted leg sticking out from beside the post as she was behind it peeing facing it (front view to me in the alley). Streams of piss were running out from each side of the post towards me in the alley, as I figured I didn't have a good angle of her and would have to walk up close to her where she'd see me - and it still wouldn't be a revealing enough scene to risk that, she'd probably be finished by then and upset with me being there. I walked past there in the alley and stopped in an alleyway by the next building leading to the street and looked back into the dock, her 2 streams of piss flowed from each side of the post making their way all the way out to the alley as she peed and peed - I would have had time to go up there and snap her, but I never know that until I see a lady doesn't stop peeing! Finally she finished and stood up and pulled up her panties and jeans some 45 seconds later, taking her time adjusting and tucking things back in. She then hoisted her backpack over her arms and walked out of the dock and back out to the alley where she entered, I noticed her thin streams of piss had made it all the way to the middle of the alley and into a drain there - a huge piss, probably the biggest of this year from an average-sized lady! 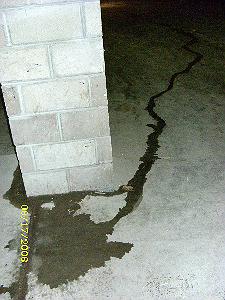 I went up into the dock and snapped these 2 pictures: this first from right above where she peed looking out towards the alley, and... 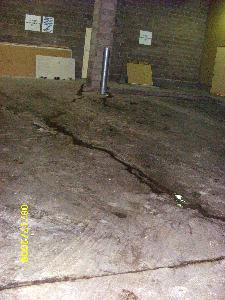 This 2nd picture was snapped from the alley near where I was when I first saw her, the drain in the middle of the alley her streams of piss ran into off the lower right edge of this picture. The concrete post she peed behind is in the top center of this picture, you can see her streams of piss running around both sides of it and how far her left stream of piss travelled from there to make it to the drain in the alley. After looking at her piss puddle pictures I kinda wished I'd snapped her peeing picture, but since she was mostly hidden and I couldn't have gotten a much better angle than what you see here (only her squatted right leg by the left side of the post above her long-running stream of piss) I'm OK with passing on it.

1:48 a.m.- I came back out to the shuttle stop, stopping on the small island for the bus going in the opposite direction that is near the alley. A canopy is over that island and it was still raining hard with lots of people walking by the RTD building, a 20's couple were at that island when I got there. The lady was tall and thin with long brown hair wearing jeans and high heels, squatted down in a peeing position with a pained look on her face with the boyfriend standing near her talking to her. Was she sick, drunk, what? After a few minutes I crossed back over to the shuttle stop area by the RTD building, looked over to the island to see the lady now standing talking to her boyfriend. She pointed to the alley I just came from and walked into it with her boyfriend following, now it was clear she was squatted with that pained look on her face because she had to pee - verified by the fact she pressed her hand into her crotch as she walked down the alley! I crossed back over to the island as they got to the loading dock area and turned up into it, I again entered the alley again not getting out the camera because I didn't think a picture would be possible with the boyfriend there. When I got to the dock area I saw him immediately, he was standing by a generator behind the building near the alley peeing by it - I was about to pass him. He turned his head away when he saw me, seeming disgusted that he'd been caught peeing but didn't say anything. Where was the lady? Suddenly I heard her voice, "Sorry!" she said loudly. She was at the back end of the generator, in a space between the side of the generator and building wall in a sitting position with her naked butt against the wall peeing. She was just a couple of feet away as I passed right by her, seeing a big piss puddle on the light colored pavement behind her feet and directly underneath her squatted butt. She started standing up and pulling up her panties as I walked by, her piss was nowhere near as big as the earlier lady's but she let it all out in about 10 seconds. The guy peed a while longer, then the 2 walked back out to the island. I saw her big piss puddle by the generator, it pooled up right there and no streams of piss ran from it into the alley.

P-TV: Last week I saw a segment on a Fox Morning show (Morning Show with Mike and Juliet) called 'Women and binge drinking'. They were interviewing 2 mid-20's ladies who are like the ladies in my pee sightings area, who thought drinking to the point of doing stupid things was OK. I had a feeling something fun might happen in this segment and one of the ladies was justifying that her out-of-control drunk behavior was no big deal because she could stop drinking anytime she wanted. Co-host Mike dropped the bomb when he casually asked the lady, "Have you ever peed in public?" I was SHOCKED when he said that and was even more surprised when nobody seemed offended by the question! "Ahhhh..." the lady stammered, after thinking about it a bit said, "I can't remember." I knew right away she was lying, of course she's peed in public! Then her friend quickly jumped in. "Yes she has, I have pictures!" she said. The lady turned her head and looked away in embarrassment, again there was no reaction from the hosts or studio audience as they quickly went to another subject.

Peeing - such a natural part of life, things about it will always come up at various times when you least expect it!