The guard shone his light down onto the peeing lady.

A tiny report this week with just 1 pee sighting to report, bigger with the addition of a puddle shot and some of my thinking-out-loud reflections on this sightings year. Cold rainy weather kept me in last weekend, I've been doing this so long it seems like a long time between outings when I miss a weekend!

The 1 pee sighting gives me 5 for October and 87 for the year, slightly ahead of last year's 84 on this date, but I had 7 of my 11 October sightings of women pissing by this date last year with the final 4 sightings coming on Halloween weekend. That's still 2 weekends away this year as Halloween is on the month's last Friday night, weather is the main factor that will determine my sightings possibilities the last 2 months of the year. While rain wiped out last weekend's sightings work, this weekend saw night temps in the low 50's and light jacket weather again. Crowds are showing their typical fall decline in size, but according to my late-hour lady counts they were pretty good: just slightly below my average crowd size (since I've been lady-counting) Friday night and slightly above average on Saturday. I still can't really gauge the effect the slumping economy is having on the area but I'm sure there is some, crowds were definitely smaller at bars in the busy area but bigger in the south part of the area to make up the difference - all the bars throughout the area remain open, for the time being. The sprinklers on the grassy patio area on the RTD block have been shut off for the winter, a good thing since they watered the grass during the closing hour both Friday and Saturday nights this summer to keep people from going there to pee. The lone pee sighting came late Saturday night, it's story followed by some of my reflections on the year's sightings of women pissing and new stats:

Sunday, 1:52 a.m.- After a weekend of watching guys running off to pee while ladies just watched but wouldn't do it themselves, I went over to the RTD block as I'm watching it more with the sprinklers turned off. A mid 20's couple was walking up to the terminal building doors at the south (shuttle bus stop) end of the block where I was, the Saturday night security guard who has been watching the pee areas was across the street at the shuttle bus stop talking to another security guard in a car who had stopped there. The couple walked up by the doors and stopped, the lady staring inside the terminal building. She was about 5' 6" and chubby with long brown hair wearing black pants and a blue waist-length coat, they were not close enough to the doors to trigger the automatic sensor which opens them. I don't know if they thought the building was closed or didn't want to go in, the lady turned and started walking down the back sidewalk to the pee areas with her boyfriend following. She made her intentions clear quickly as she started unbuckling the belt on her pants, I looked over at the security guard across the street at the shuttle bus stop and he was already walking over there as he saw them heading to the pee areas. The lady went to the pee sidewalk and turned up into it as the boyfriend stood guard by the entrance to it, the security guard was pulling out his flashlight as she went about 6 feet down the sidewalk and her head went down below the top of the wall bordering the grass next to and above the sidewalk as she squatted down to piss. I ran around the terminal building at that end to the patio area where I could see them from behind, the security guard walked over to her boyfriend and shined his flashlight in the boyfriend's face and told him to move. The boyfriend moved out of the way and the guard shined his light down onto the peeing lady (I couldn't see her below the top of the wall), after about 5 seconds she stood up and pulled up her pants and slowly walked out to the security guard - he had watched her pee in the light of his flashlight! He asked for her ID like he was a cop, kept her and the boyfriend there for almost 10 minutes scolding them. I went back out to the sidewalk where I could see the crowds walking by the corner parking lot across the street, a lady was standing about 15 feet from me. Finally the couple came walking over there, the lady by me had been with them and waited for them when they went off to find her a place to pee. "What happened? Did you get in trouble?" she asked the chubby lady who peed. "He talked a lot of shit, took my license and wrote down my name and stuff!" the chubby lady said. The group walked off, she didn't seem concerned about it. The security guard had now gone into the terminal building. 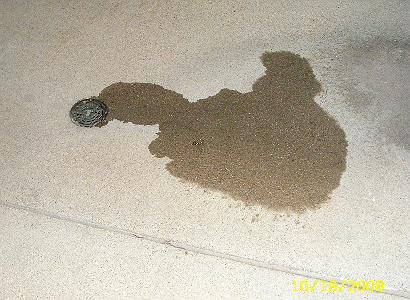 I went over to the pee sidewalk to find her above-average sized puddle near the middle of the sidewalk, the stream from it running into this drain - it was a bigger piss than the puddle looks here. She was peeing for less than 10 seconds before the security guard's flashlight shined on her, which I'm sure made her tense and to finish peeing quicker than she would have without his attention. This was a pretty impressive puddle for such a quick piss taken under duress, it's easier for ladies to stop mid-piss and walk off without completely emptying their bladder. She would have probably flooded the sidewalk if she got to pee long enough to completely empty herself, was she too lazy to go inside to the toilet or so desperate she couldn't hold it long enough to go inside and get to the toilet? She started peeing right when she got to the sidewalk after barely getting her pants down in time, so she was probably at the point where her bladder was bursting and was about to pee on herself. Always super-sexy to see this happen to a lady!

The security guard's actions verifies that they are now aware of people peeing there and are making deliberate efforts to stop it on the RTD block - which will make it harder to get sightings of women pissing there. That south end of the block where the pee areas are had 28 sightings of women pissing last year and just 17 this year, attributed to the late grass watering and the presence of security guards in the area preventing people from going there. This is the first time I've actually seen a lady caught peeing there by someone other than me, these security guards are really looking for that! But I have more sightings of women pissing overall than a year ago at this date, so as always this isn't stopping ladies from peeing they are just being pushed to other spots in the area.

Pee count: The lone Saturday night lady was 2 tenths of 1 percent of the Saturday night late-hour ladies, overall since I've been doing my lady-counts half of 1 percent of the ladies have peed on the 21 nights where I've gotten sightings. Put in easier to understand numbers, that translates to 1 lady peeing outside for every 200 I see in the sightings area. The average number of ladies I see during those late hours is 449 per night, hence my average of about 2 sightings of women pissing per night. This night's lady count was 453, about average, but I was short a pee sighting with just one. But there have been nights where I've done better than 2 sightings, producing better pee ratios on those nights. 3 different nights this summer I've gotten 5 sightings of women pissing each night, crowds of 150, 370, and 617 ladies during those hours produced pee ratios of 1 pee sighting per 30 ladies, 1 pee sighting per 74 ladies and 1 pee sighting per 123 ladies on those nights. Isn't it fun to look at it this way? No question the lady-counts have livened up what has been an otherwise boring sightings year, the dynamics of the area are definitely changing for the worse as my sightings of women pissing are going down. I will always be amazed I've had the success I've had for as long as I've had it, considering all the things that have to be in place and remain in place for the large numbers of sightings to keep coming - everything from the places open and the crowds they draw and the kinds of ladies who come to the area. The single biggest element is the ladies themselves, there definitely aren't as many of them who are peeing outside now as there were maybe 10 years ago as I continue to see more of them refusing to pee in situations where past ladies wouldn't hesitate to do it. I think there are just as many ladies walking the streets in the sightings area needing to pee now as in the past, but more of today's ladies won't do it and force themselves to hold it. I think the reasons for this are not the typical ones ladies have always had (it's disgusting or they don't know how to pee outside), I think it's the possibility of being caught and winding up on the Internet for everybody to see (I've heard ladies say that), today's Internet-generation ladies know about the popularity of female peeing on the Internet because of the attention brought to it by people like me - a consequence of my success, I guess! Most guys into this have come and gone, I get few if any of the reports I used to get from other guys - and the occasional lady - who used to get their own sightings of women pissing.

Weather looks clear but cold for next weekend as night temps are dropping down to freezing or below more consistently. I'll see if my tolerance for the cold has diminished, freezing is about where I'll draw the line on being out unless I'm getting multiple sightings of women pissing.